The coming year brings important changes to the international plastic market. The biggest importer of used plastics, China, closes its border to yang laji or “foreign garbage”. Other countries seem to be unprepared for the change, and the environmentalists express theirs concern that more plastics will end up in the oceans. 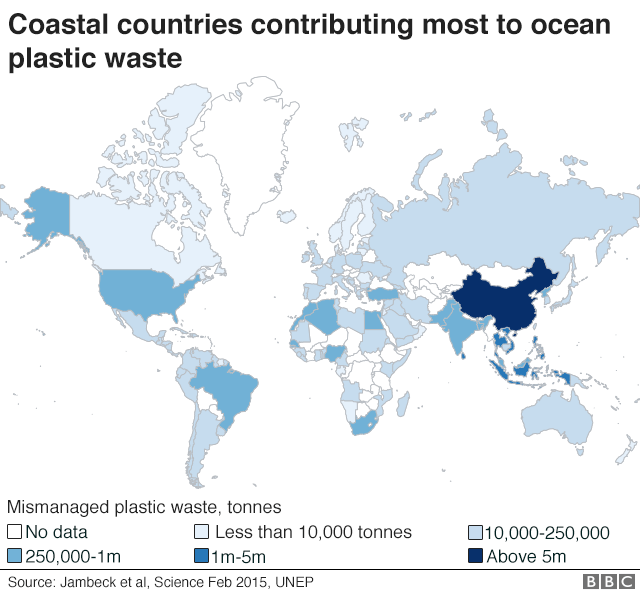 In 2016, China bought more than the half of the world’s used plastic which accounted to over 7 million tons. It used to be a cheap way to produce plastic items for an actively growing economy. However, China did not manage the flows of plastics properly, and ranked very low among other countries in terms of ocean plastic pollution. According to the UNEP, more than 5 million tons of plastic waste was mismanaged.

Chinese government decided to change its strategy for plastics by introducing a ban on foreign plastic scrap. It is both bad and good news depending on the perspective.

Polyethylene made up about 2.5 million tons of imported plastic waste. Therefore, market specialists predict a shift in consumption from recycled polyethylene to prime virgin polyethylene. This is great news for US chemical companies which already prepare for increased demand and open new plants.  According to Bloomberg citing IHS Markit analyst, US exports of polyethylene plastic will reach 5 million tons by 2020, a five-fold increase from last year. The biggest part of these exports will go to China.

However, waste collecting companies are preparing for the hard times. It is especially relevant to the businesses in the UK and US since they exported the most to the Chinese market. For instance, two-third of the UK’s waste plastic exports went to China. It was economically not feasible to invest in local recycling facilities, and, as the result, the national recycling industry remained underdeveloped. Now the UK environment minister is under strong pressure to fill this gap and build the national industry in a short time. So far British government doesn’t have any concrete strategy on how to deal with mountains of plastic waste that will flood the UK in less than a month. Obviously, there is a market opportunity here. But the question is: how to make it a win-win situation for consumers, businesses and environment?

Green groups worry that environmental risks are too high in a short term. They warn that considerable amounts of plastic waste will go out of control making their way into the oceans and eventually ending up in the food chain. Ellen Macarthur Foundation claims that by 2050 there will be more plastic than fish in the oceans. However, if recycling rates do not decrease, this ratio may be reached even sooner.

BOMAC Industries strives to provide innovative solutions for recycling plastics and paper and offers a wide range of recycling lines and machines.